The assembly and procession of October 11, 2015 in Minsk was peaceful. The absence of an application for holding mass actions, required by law, is not a reason to limit the freedom of peaceful assembly. We should also mention the spontaneous character of the action and the inability to identify the organizers.

The main negative phenomena were the presence of a large number of unmarked police, the drawing of a report of administrative offense on 17-year old Yahor Skrabneuski for the participation in the unauthorized event, the use of the rout taxi as the place for compiling the report. We should also note threats of the police to use to use violence in the case the participants would not disperse, conveyed through sound-amplifying equipment in a public place with a large display showing the latest events in the country.

Observers noted a number of positive factors: a policeman in the uniform talked to the observers and offered them to address him in the cases of necessity. Ambulance car were seen not far from the action site.

Belarusian Helsinki Committee and the Human Rights Center "Viasna" have been carrying out systematic monitoring of public events in Minsk for several years already, being guided by their own methodology for monitoring, which includes the recruitment and training of observers regarding the principles of public control, standards of peaceful assembly and monitoring methodology; filling out the questionnaire during the monitoring on the spot; procession of the questionnaires and writing the monitoring report. The observation questionnaires have been developed jointly by the human rights organizations and include questions regarding the possibility of implementing the functions by observers and the media, the behavior of the organizers and participants of the mass event and the police, as well as the presence of ambulance cars. Observers are admitted to watching only if they agree to comply with the rules and principles of observation (independence and political neutrality; description of the facts, not opinions; non-interference in the event, which is being monitored; commitment to the principles of law; rejection of all forms of violence and discriminatory practices; correct behavior). During the execution of their duties observers keep separately from the action participants. They are marked designated with badges and blue vests.

During the demonstration of October 10, 2015 in Minsk,politicians publicly refused from holding protest events on the election day, October 11. However, calls to come to Kastryčnickaja Square at 8 p.m. on October 11 were distributed through a topical community in the social networking website “Vkontakte”.

During the mass event October 11, 2015 full-scale and continuous public control was exercised by 11 observers with badges of the Belarusian Helsinki Committee, who were wearing blue vests with the inscription “#controlBY” and had received a proper training. Apart from them, the event was monitored by six foreign observers, who were wearing yellow vests with the inscription “Nabludatel” and had IDs of international observers.

1. At about 8 p.m., demonstrators started raising first flags in the center of Kastryčnickaja Square. There appeared two streamers, lit fireworks and turned on music from a portable sound system. 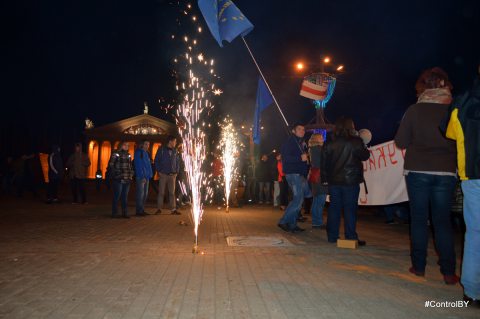 At 8.06 p.m. a car with sound-amplifying equipment arrived. It turned in a place where it is banned by the traffic rules and warned the demonstrators that “the event is unauthorized, we ask you to disperse, otherwise you will be held liable”. The demonstrators put an USSR flag and a rifle in the center of the square and held out election-related leaflets. They chanted slogans, turned on music, listened to the news from the large display on the square, and made short speeches. At about 8.49 the car with the loudspeakers again warned them about the possibility of the use of physical violence, police gear and liability in case they refused to disperse.

At 9.05 p.m. the crowd went to eh Red Church along Niezaliežnasci Square, following calls of unidentified persons. The majority of the demonstrators crossed the streets at the green lights and used underground crossings, though a part of them were crossing the streets ignoring the red lights.
At about 9.25 the majority of demonstrators reached the Red Church, being accompanied by policemen in civilian clothes. There was held a prayer, speeches were delivered. At about 9.40 a youngster, wrapped in the Russian flag, appeared at the entrance of the church. He paid an aggressive reactions to remarks of an observer and tried to provoke a fight, but eventually ran down the stairs and ran away towards the hotel “Minsk”. At that time a part of the action participants dispersed, whereas others stayed at the entrance of the church.

At 10.07 p.m. two policemen in the uniform (one of whom had a video camera go-pro) came up to the youngster, who was holding the only remaining flag on a flagpole, and started compiling a report for participation in the unauthorized mass event. He was led to the right entrance of the church, where a rout taxi was parked. There the administrative report was compiled, after which the youngster was released from it. 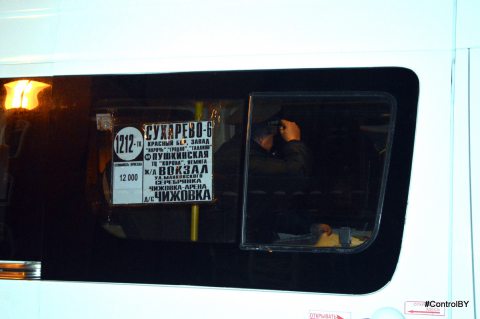 The crowd dispersed completely at about 11 p.m.

2. The number of the action participants was about 50 at the beginning of the event, and about 200 during the procession and near the Red Church.
3. It was hard to determine the number of law enforcement agencies, because they weren't designated and didn't wear the uniform. There were two traffic policemen in the uniform and about 50 people in civilian clothes with distinctive signs (earphones, walkie-talkies). All leaders of the Main Police Department of the Minsk City Executive Committee and the district police departments were present, wearing civilian clothes with no distinctive marks. 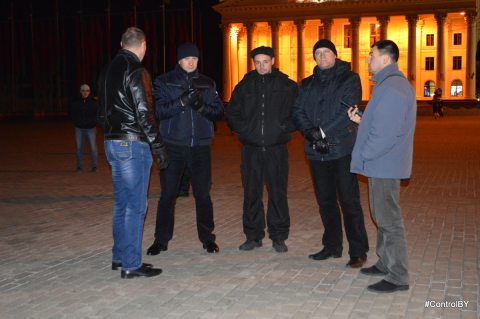 4. On Kastryčnickaja Square, a policeman in the uniform politely spoke to the observers and let them address him in the necessary cases regarding the securing of the public order during the event.
5. No incidents were registered in the work of observers.
6. The organizers of the mass event weren't designated and its was impossible to identify them due to the absence of the organization of the mass event. There was no civil guard, formed of the action participants to secure the public order.
7. There weren't registered any calls to violence on the part of participants of the event.
8. The demonstrators used the following posters and streamers: “Boycott of the Dictatorship!” and “Lukashenka, retire!” and a poster “Ditator, Belarus breaks the contract with you!”
9. They chanted the slogans “Glory to Ukraine – Glory to the Heroes!”, “Fatherland, freedom, down with Freeky Luka!”, “It's time to change the bold tire!”, and the religious anthem “God Almighty”.
10. They used fireworks four times.
12. The observers received information about the detention of a car driver, who beeped n support of the demonstrators. The formal reason was the suspicion of a theft on finding five packs of juice in the trunk of his car.
13. The observers saw an ambulance car near the Palace of the Republic.

It would be hard to convey any recommendations to the organizers due to the inability to identify them.

Participants are advised to use fireworks in strict abidance with all safety precautions for fire prevention.

1) to secure the public order during mass events wearing the uniform, as well as being designated with identification cards (badges or breast signs);

2) to more clearly designate the contact person from the number of police officers with the aim to facilitate the communication between him/her and observers and the media;

3) not to intimidate members of peaceful events with the use of physical violence and police gear;

4) to stop the practice of drawing up protocols on administrative violations against participants of peaceful assemblies.


to subjects with the right of legislative initiative:

to initiate amendments to the legislation to bring it into line with international standards on freedom of peaceful assembly, paying a special attention to regulating the order of spontaneous assemblies.