Observer Yury Liashenka trying to get to polling station

As learned by the HRC “Viasna”, October 11 an observer of the campaign “Right to Elect” Yury Liashenka was unable to observe the election sat polling station No. 15 in the town Liasny in the Minsk district due to the absence of access for wheelchair users.

He also wasn't able to park near the buildings of the polling station and the town council, as there was no parkings for the handicapped. Meanwhile, large repairs in Liasny ahed of Lukashenka's visit ended just a week ago. 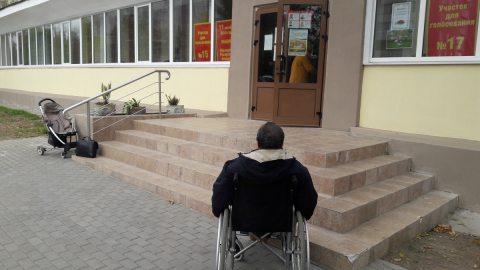 “At first I wanted to observe the elections at this polling station, at which I was accredited, but I wasn't ale to get there, as there was no barrier-free environment. There is no ramp. I tried to climb the stairs on my own, but didn't manage to do it.

In some time, the commission chairperson went out. She confirmed the lack of the barrier-free environment at the polling station and offered her assistance. However, she didn't tell what assistance he could render. In addition, I want to feel as a free person, who can move freely, without having to depend on anyone, but this was not provided. 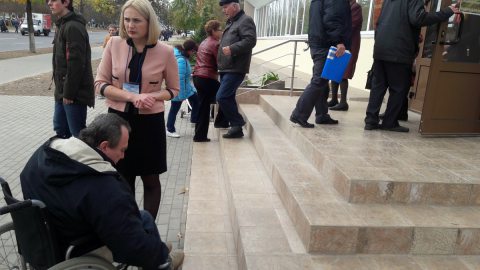 Thus, I was unable to exercise my right to observe the elections there and had to move to another precinct that had the necessary facilities,” commented Mr. Liashenka.